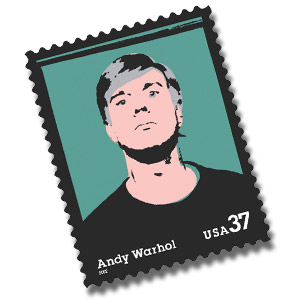 Criteria for Stamp Subject Selection A group known as the Citizens' Stamp Advisory Committee composed of educators, artists, and other experts in their fields recommend subjects and designs to the Postmaster General. In addition, they select the artists who will execute the designs. The following is a simplified version of the Criteria for Stamp Subject Selection which the committee uses in selecting themes and subjects:

1. In general, only American or American-related subjects will be featured.

2. Portraits of living people are forbidden.

3. Commemorative stamps honoring individuals usually will be issued on his or her birthday and no sooner than ten years after the individual's death. However, a deceased United States president can be honored with a memorial stamp on the first anniversary following death.

4. Anniversaries of important historical events will be commemorated in multiples of 50 years.

5. Only events and themes with national significance which appeal to a broad range of people will be considered. Local and regional events are not eligible.

6. Stamps shall not be issued to honor commercial enterprises, products, fraternal, political, sectarian, or service/charitable organizations that exist primarily to solicit and distribute funds.

7. Cities, towns, municipalities, counties, primary or secondary schools, hospitals, libraries, or similar institutions cannot be honored by appearing on stamps. For the most part, their vast numbers make it impractical to single out any one for the honor.

8. Statehood anniversaries will be considered only at intervals of 50 years from the date of the state's entry into the Union.

9. Religious institutions and individuals whose main achievements are associated with religious undertakings or beliefs are ineligible.

10. Stamps or stationery items with "added values" shall not be issued. It would be difficult to determine which organization should receive the revenue generated from them, because there are so many worthy, fund-raising organizations in existence.

11. Stamps honoring significant anniversaries of universities and other institutions of higher learning shall be considered only in regard to the Historic Preservation Series postal cards.

12. Subjects which have been represented on stamps are eligible only every ten years. Exceptions to this rule include stamps which recognize traditional themes such as Christmas, U.S. Flags, Love, etc.